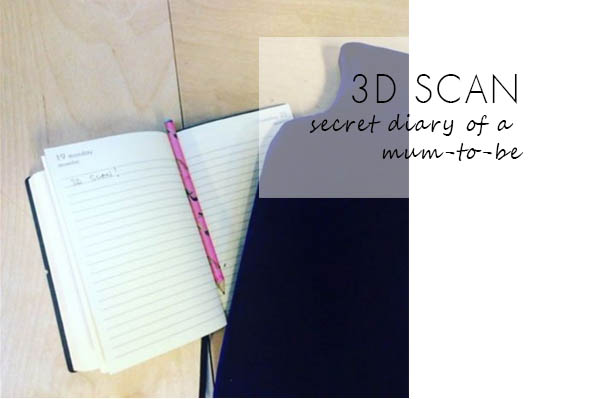 Writing this from a caravan in Norfolk – so nice to get away for a few days and relax! I feel like the past few weeks have been a blur of different appointments, so some time away is what’s needed!

So we had the 3D gender scan and baby is definitely a girl – the sonographer even printed us off a picture of the area to prove it haha – one to pull out on her 18th! It was an amazing experience to see her little features even if they were a bit skeletal – at roughly 28cm long, she’s still small and the layer of fat that we all have under our skin is yet to form. She was doing a nice dance for us and even had her hand up by her head so it looked like she was waving. We took the parents and I’m sure my dad had a tear in his eye!

So today was my midwife appointment and all was fine. Urine tested negative for glucose which was a relief because at my consultant appointment back in April they did find minor traces but midwife says it was probably because I’d had something sugary right before taking the sample – that bottle of Lucozade probably wasn’t the best idea!

Got to hear the heartbeat also – I don’t listen as much now at home because I feel her every day. With that comes the typical expectant mother worry of how many kicks a day are enough but so far she seems active enough.

I got my letter through also for my next growth scan – I have to have those because of my thyroid medication. It’s fallen quite conveniently on the same day I have to go and have my 28 week Anti D shot and is in the department next door to the labour ward, so all being well that will all work out and it means less time off work (and less car parking charges to pay).

Baby is kicking away, we’re still trying to decide on a name – family and friends are “helping” with that – we’ve also been looking at nursery curtains and bedding so it’s all normal, nice things going on at the moment.

I’m starting to feel the strain of carrying this extra weight around mind you – given baby is now about 35cm long (and now measured crown to heel rather than crown to rump), I can feel the extra weight! Apparently she is gaining fat and her brain if scanned would show responses to touch. I think it’s all a growing exercise now really for her, and learning how to do new things like blinking and breathing as we move forward!

Had a good discussion today with my boss about maternity leave so I think that’s all sorted; midwife gave me my maternity form so I’ve handed that in – it all seems to be getting scarily close now, what happened to having 9 months to go?! It’s exciting but scary at the same time and I’ve started thinking about labour….uh-oh! My friend tells me I’ve got to write a birth plan but I’m sticking my fingers in my ears and ignoring her for now – it all seems too early. Maybe when I hit the third trimester which is only 3 weeks away….arghh!

Our holiday was good but I can feel the weight now and do struggle to walk any real distances even on the flat – so a rather less active holiday than normal but still nice to be away! I’m still plagued with nosebleeds and developed a rather odd bruise when we were away on my arm which is very painful; I can’t remember knocking it so I’m going to just check with the midwife when I see her that my platelets are OK – sure they are!

Baby is growing fast now and it all seems like it’s hotting up a bit – midwife appointments will now be every 3 weeks and I have to book a whooping cough vaccination for 28 weeks+. I also have my Anti-D shot and growth scan to look forward to on 12 June and my first bump measurement, so will keep you informed…

So it’s pretty scary to think I’ll be 27 weeks on Tuesday! How did that come around so quickly? I’ve developed a really sore right side, it aches and is tender just below my ribs. I’ve adjusted how I sit at work but it’s starting to really bother me so if this carries on looks like I’ll be making a visit to the labour ward…. But it could just be baby pressing into my ribs. I think it’s really hard to know (especially as a first time mum) when something is normal and when it isn’t!